These instrumentals represent my emotional response to the particular environment of the moment, usually the physical natural setting or the people circumstances. The banjo itself is a bottomless well of sound possibilities and the compositions seem to emerge when I get out of the way. I’m influenced by the music that I’m listening to at the time, an because I enjoy a wide variety of music, this is reflected in the diversity of these compositions. Rhythm an percussion have been major interests in recent years and this perfuses the music.

I am very fortunate to have Paul Mills in my life. Hi is a record producer, sound engineer and side man (Curly Boy Stubbs) second to none. After hearing some of my tunes, he offered to record them at The Millstream, his studio in Toronto. Although the tunes are my babies, there’s no doubt about his role as the midwife. April Verch is a virtuoso fiddler who, by happenstance, was able to contribute two sons (Hammering on Medley, Leaving Home). Her artistry and sensitivity are obvious in her interpretations of these songs. Trevor Mills is a gifted musician who arrived on the scene just in time to provide some tantalizing bass rifts.Terry Seftlon, of Orchestra London is no stranger to the recording studio, an her cello gives the grounding and spaciousness that I was looking for.

I will be forever indebted to my old friend, musician and composer Beverly Glenn Copeland for his stunning vocal arrangements which he put together in Pheonix, Arizona. His intrinsic musicality and ability to connect intuitively have raised the level of this CD beyond my expectations. 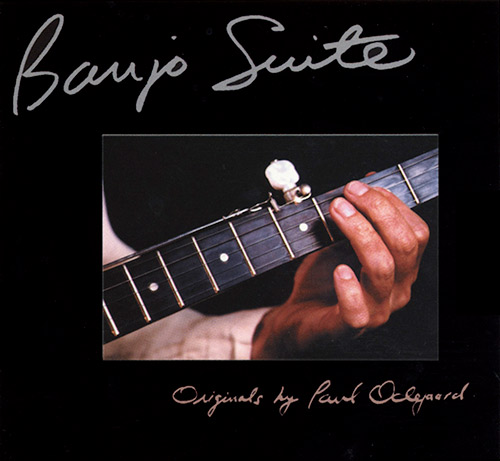 One advantage of instrumental music is the listener is free to experience the feelings and sensations without being guided by verbal images. The brief descriptions that accompany the following song list are not intended to distract you from your own associations.

Scroll to bottom to hear the songs.

1. Hammering on Medley – with banjo, mandolin, fiddle and bass.
As simple exercise of “hammering” on open strings in a traditional style – pure fun in the making.

3. Beverley’s Farewell – with banjo, guitar, cello and voice.
Titled to Beverly Glenn Copeland, who visited me while on his way to Phoenix, a new chapter in his life. His spontaneous vocalizing to this tune lead to a wonderful collaboration on other sons as well.

4. Early Garden – with banjo, guitar and bass.
Picture the garden in the early spring, with patches of snow and the crocuses and early tulips just pushing though, and knowing that an explosion is just beginning.

5. Simple Frailty – with banjo, guitar, mandolin, bass and voice.
This was quickly composed in a “D” shape (Tuning with5th string capoed at A) and its’s filled with Arkansas energy.

6. Lost & Found – with banjo, guitar, percussion and bass.
I didn’t have a tape recored and I don’t write music, so occasionally I would forget an idea for a melodic line or specific rhythm. This tune required a lot of searching on the banjo and in my memory banks to retrieve it.

9. Bekanon – with banjo and cello.
I’ve attempted to recreate the delight and spaciousness of northern Georgian Bay where rock, sky and water weave a magic spell.

10. A Father’s Lament – with banjo, percussion and voice.
A daughter leaves her father and a father loses his daughter. The tune is powerfully influenced by the vocal arrangement which accentuates the underlying mood.

11. August Love – with banjo, guitar and cello.
Composed in August in celebration of my life long relationship, now in it’s “August period”, with Sandra, my source and inspiration and most valued critic.

12. Teeter Totter – with banjo, mandolin, keyboard, percussion and bass.
A playful, light hearted tune that emerged from the banjo while experimenting with the 3 finger style.

13. Haley’s Comet – with banjo, guitar and bass.
The first composition for this CD is named after my granddaughter. The tune is played in the traditional 3 finger picking style of Bluegrass and the banjo is front and centre.

14. Beverly Hills Billy – with banjo, guitar and bass.
Although there is some resemblance to Flatt and Scrugg’s famous theme sons for the Beverly Hillbillies, the picking is noticibly different with a mixture of Travis and Scruggs styles. This is also a medley of 2 songs.

15. Phoenix – with banjo, hammered mandolin, ukelele , djembe and voice.
This started as an upbeat jig in the Celtic style and was transformed by the vocal arrangement into something more African than European. It’s a good example of the unexpected when voice meets banjo!

16. Leaving Home – with banjo, guitar and fiddle.
My favourite simple melody that emerged in response to the mixture of emotions surfacing in the face of transition, in this case the launching of family members into the world.